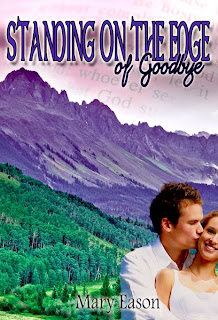 Today on Make-Believe Mondays my guest is Mary Eason.

Mary, first, tell us a little bit about the manuscript
you’re working on now.

Mary:  Standing On The Edge Of Goodbye is an inspirational romance about second chances. Matt Stevens is finished with life. Grieving the death of his son, Matt withdraws from humanity, sequestering himself in a mountain cabin far from the reaches of anything human-anything that may remind him of the life he can no longer have...that is until Kate Alexander arrives on his doorstep and begins to strip away the bitterness he carries in his heart.
Running from an abusive ex-husband who tried to murder her, Kate Alexander's life is turned upside-down. Learning of her grandmother's death-the only woman who ever believed in her-is almost Kate's complete undoing, especially when the devastating news comes from a man so lacking in human emotion he may as well be a robot. Yet, Kate is drawn to Matt Stevens in a way she's never before experienced. Could there be more to this unlikely friend of her Grandmother's-something beyond the cold surface he presents to the world?

Debra:  Ray Bradbury said, “We are cups, constantly being filled.  The trick is, knowing how to tip ourselves over and let the beautiful stuff out.”  How do you keep your creative cup filled?

Mary:  By reading. I love to read. It not only ignites my creative juices, but it helps me to relax and unwind.

Debra:  Is there a point when your characters begin to come alive and you can see and hear them?

Mary:  When I first begin a story, it starts with a basic idea that might come to me in a dream or from something I’ve read or head on TV. From there the characters begin to come alive along with the storyline. I usually simmer on a new book idea for a few days to get the backbone of the story mapped out in my head. And then, well then the characters take over and it never ends up like I expected.

Debra: That's part of the fun of writing, I think. The way characters and stories can surprised you.

Some very famous authors have played with language, creating words for people or places that no one has ever heard of.  Have you ever played with words in that way and if so how?

Mary:  No, I cannot say that I’ve played with words. In some of my romantic suspense stories, I have taken certain liberties with law enforcement procedures and protocol, but that’s entirely different.

Debra:  For some writers, dreams play a role in creating fiction.  Has this been true for you?  Have you ever dreamed a scene or an image that later wound up in one of your books?

Mary:  Definitely. I’d say about 80% of my stories come to be in dreams. Many times, I’ll dream most of the story that ends up becoming a book.

Debra:  How wonderful to have such a vivid dream life. Some of the best stories have come from dreams.

Mary: I was a huge Victoria Holt and Phyllis Whitney fan growing up. They’ve definitely influenced my romantic suspense writing.

Mary:  Its funny you should say that because that’s pretty much my process for getting a new book typed. I start with my idea then allow myself to simply write. I don’t worry about boundaries, or genres or pleasing anyone but the characters in my head.

Debra: Awesome to be writing with complete freedom.

Is there anything else you would like to add about the role of imagination, and dreams in creating fiction?  Any other message for our readers?

Mary:  I believe that as a writer, my next book is limited only by my imagination. And there’s nothing more intimidating or exciting than sitting down in front of a blank computer screen and writing those first few words that later become the story of your dreams.

Debra:  So true.  Mary, thank you for joining us here on this Make-believe Monday to share a little bit of the magic of writing with our readers.

Mary:  Thanks for allowing me to spend time with you and your readers.

Debra: It's been a pleasure.

Readers can visit Mary at

Continuing revisions on the novella, also planning to submit to another agent on my list of preferred agents this week.  While it is not true that once you are published you'll never get another rejection letter, I have had two of the nicest ones I've ever received from agents recently.  It's important that I match up with the right agent for me, so I am far from discouraged.  The letters tell me that it's more about finding the right match that it is about my writing or this story. And the right match is worth waiting for.

What else is new?  Lately I've been getting emails from various people wanting writing advice, so I decided to post in the notes section of my facebook fan page.  I'll do that every so often and pick topics which relate to the questions I'm getting.

And I also have some spots on the Make-Believe Mondays calendar to fill.  If you are an author of fiction you can request an interview using the form on my website,
www.debraparmley.com
or by sending me an email.

nice site....great idea with the mondays concept. Send me an email if you want to interview, I am just getting started on marketing my book after a year delay. My website is madmartysrvtravels.com and my email is saltriverbob@gmail.com