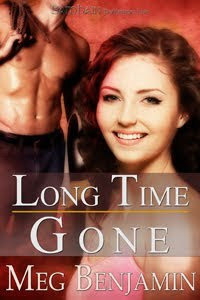 Today on Make-Believe Mondays my guest is Meg Benjamin.

Meg, first, tell us a little bit about the manuscript  you’re working on now.

Meg:  My fourth Konigsburg book, Long Time Gone, was just published by Samhain Publishing on July 6. It’s the story of Erik Toleffson, a reformed bully and petty criminal who’s now the chief of police. Obviously, he needs to prove himself. Here’s the blurb:
A future with the woman of his dreams is within his grasp…if the past will stay that way.
Konigsburg, Book 4
Erik Toleffson wasn’t looking to become Chief of Police. He’s got enough trouble trying to rebuild his relationship with his three brothers who, until just recently, ran the other way when he approached. He’s not the bully they grew up with, but bad memories are tough to overcome.
Morgan Barrett is as worn out as a vat full of crushed grape skins. She never planned to run Cedar Creek Winery, but there’s no one else to shoulder the load as her father recovers from an injury. All she needs is a little sleep. Just a five-minute nap in the booth at the Dew Drop Inn…if that guy across the bar would stop staring at her as if putting her head down on the table is a crime.
After Morgan yawns in Erik’s face, there’s nowhere to go but up. With time, though, their relationship warms like a perfectly blended Bordeaux. Until the shady mayor digs into Erik’s past and dredges up information that could drive a permanent wedge between him and his brothers—and sour any chance of a future with Morgan.
Warning: Contains hot sex with mango sherbet, crooked politicians, yuppie bikers, Bored Ducks, and a Maine Coon Cat with attitude.

Debra: Ray Bradbury said, “We are cups, constantly being filled.  The trick is, knowing how to tip ourselves over and let the beautiful stuff out.”  How do you keep your creative cup filled?

Meg:  I think it’s important to read while you write, and not just people who write the same things you do. For example, I love mystery writer Jane Haddam, who’s about as unromantic as you can get. But she’s an absolute whiz at creating characters, particularly villains who are awful people but still fascinating in their own right. I’ve learned a lot from her, and from wonderful prose stylists like Sarah Smith, James Lee Burke and Eloisa James. I’ll never write like they do, but I love to read their books just to experience their style.

Debra:  Oh, I agree.  I'm believe authors should read as widely as possible.  Good writing is good writing, whatever the genre.

Is there a point when your characters begin to come alive and you can see and hear them?


Meg:  I’m a total planner—I need to have most of the plot worked out in advance (although I find I always veer off into unexpected areas no matter how much planning I do). I plan the characters too, but people are always a lot harder to pin down. As they talk to each other, I begin to get to know them, and I find myself thinking “Wouldn’t it be interesting if he did this?” or “Why would he feel like that?” As the characters become characters, that is, as they become people, they start to move in directions I never planned—and that’s a lot of fun!

Debra: It's great when those characters come alive and start driving the story.  Of course not being a plotter or planner I like that part.  lol I've always wondered how authors in the other camp felt about it when it happens.

Meg:  I loved the Narnia books when I was a child, and a book called Half-Magic about a family of children who find a magic coin, only it only provides you with half of what you wish for! Both of these series start in the real and work to the fantastic, which is my favorite way of doing things.

Debra:  Oh I must look for Half-Magic.  Hadn't heard of that one.  Loved Narnia as well.

Is there anything else you would like to add about the role of imagination, and dreams in creating fiction?  Any other message for our readers?

Meg:  Imagination doesn’t necessarily have to be wild—I’m working on an urban fantasy that takes place here in the foothills suburbs of Denver. Sometimes it’s more fun to take something familiar and everyday and see what happens when you introduce a foreign element that shakes everything up.

Debra:  And that's where most good stories begin.  On the day the shakes everything up.

Meg, thank you for joining us here on this Make-believe Monday to share a little bit of the magic of writing with our readers.
Readers visit Meg at
www.megbenjamin.com
--------------------
Debra's News/Debra is watching:

Continuing the agent search this week I will be sending out the contemp manuscript to a few agents.  Tidying up the word files and the hard copy files this week as well.  Had no idea I had so many stories started.  Files constist of novel length manuscripts started, one novella which needs to be completed, short stories I wrote several years ago and hundreds of poems.  I'm always writing something and should have the files better organized.  I'm finding random bits of writing tucked into files and yes even once piece written on a napkin.  Now it's not that I think every little thing I've written must be saved.  Oh no.  In fact the second half of the manuscript I'm now sending to agents had been tossed out and completely redone.  That's half a book.  But the thing about these bits of writings is that they contain story ideas, character ideas, etc. and those I do not want to lose.  So I guess I've become a bit of a paper pack rack and something must be done about that.  At least getting it all into files where I can find what I'm looking for when I want it in hand.

www.debraparmley.com
Posted by Debra Parmley at 7:30 AM

Meg, what made you want to try urban fantasy, something so different from your other stories? (looking forward to it,by the way!)

I love your characters in this book, Meg. Erik is a great character... admitting his past mistakes and short-comings makes him all the more real!
Great job!
Erin