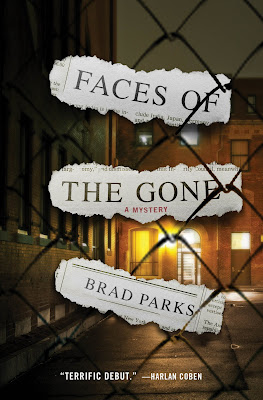 Today on Make-Believe Mondays my guest is Brad Parks. I first met Brad at the Romantic Times Book Lovers convention in Columbus OH at the big book signing where we were seated next to each other. He has a great sense of humor which made the signing all the more fun.

Brad, first, tell us a little bit about the manuscript you’re working on now.

Brad; It’s the third book in my mystery series with St. Martin’s Press, which features the adventures of Carter Ross, the sometimes-dashing investigative reporter. This one won’t be out until 2012, so I don’t want to get people too excited – it would feel like a big tease – but right now I’ve got Carter trapped in a car with a homicidal maniac on a deserted road in the middle of a thunderstorm. It’s not looking too good for our hero. But I can confirm he managed to make it alive out of the second book, EYES OF THE INNOCENT (due out early 2011). So maybe he’ll find a way to escape this time, too.

Debra: Okay, too late. I want to know how he gets out of that mess! But it's okay, a little bit of teasing is allowed. :-)

Brad: I used to be a sportswriter, and am therefore a fan of sports movies. In one of the great all-time baseball movies, Bull Durham, the grizzled veteran catcher, played by Kevin Costner, gives the wild young pitcher, played by Tim Robbins, his first piece of advice: “Don’t think. It can only hurt the ballclub.” That rather neatly sums up my feelings about creativity in two ways. One, I try not to think about creativity very much – not how it works, why it works or what makes it work sometimes and not others. I’m afraid I’ll jinx myself. And, two, my most creative thoughts come when I’m not thinking actively about being creative – when I’m driving a car, doing the dishes, or doing something else that is keeping my mind minimally occupied. There’s something about keeping your conscious mind a little bit busy that allows your subconscious to bust out and do what it does naturally.

Debra: Yes there is something to that. The subconscious is key, I believe. It's a bit like trying to remember someones name and trying so hard that it won't come, then you go off to do something else and voila. There it is. So true.

Is there a point when your characters begin to come alive and you can see and hear them?

Brad: Before I wrote a lot of fiction, I’d occasionally find myself watching some famous author being interviewed. Inevitably, he’d get asked, “Well, famous author, how do you know what comes next in your books?” And the famous author would reply, “My characters tell me where the story needs to go.” And I’d always think, “Yeah? Do your characters tell you you’re a nut bag, too? Because that’s what you sound like right now.”

Then there I was, writing my first Carter Ross novel (FACES OF THE GONE, which came out last December). I’m in the middle of this scene where Carter, in his quest for a certain piece of information, has to smoke marijuana with a bunch of gang members so they’ll know he’s not a cop. Now, Carter is a pretty clean-cut guy who tried pot once or twice in college and never touched it since. Nevertheless, he tokes up, the gang members tell him what he needs to know and I’m thinking that’s going to be the end of it. It’s time for the next scene, right? Except when I tried to make Carter rise off the couch, he started tugging on my sleeve and giggling. “Dude,” he said. “I can’t go anywhere. I’m stoned out of my mind.” I shook my head and said, “Come on Carter. You can’t just sit on the couch for the next three hours. It’s boring and this book is supposed to have a lot of action in it. Let’s go.” Carter refused to move, so I made him get up anyway, and the next thing I knew he was stumbling all over the place, crashing into walls and… well, you get the point. It turned into one of my favorite scenes (you can read it at http://www.bradparksbooks.com/faces-of-the-gone2.php) and it established something I have come to accept as a fiction writer: My characters do tell me where the story is going to go, I just have to make sure I’m listening.

Debra: Now that is a great story to illustrate this point. I always find it interesting when an author is reluctant to say they hear their story people. It probably has to do with not wanting to sound crazy. But then some will say the voices in my mind tell me.... and that one makes me smile too. You've managed to cover both aspects quite well.

Brad: My stuff is pretty well grounded in reality. So, no, I haven’t created anything like that. But I certainly wouldn’t be averse to it. The point of language is to communicate meaning. As long as the reader is getting meaning out of the invented word? I say inventimicate all you want.

Debra: Inventimicate is a good one. :-)

Brad: My dreams are, by and large, much too freaky to turn into a book. I fear some psychoanalyst would read it, interpret it, and insist I was a danger to society who needed to be institutionalized.

Debra: Though if you ever got the urge there's always the use of a pen name.

Brad: I mean, who didn’t see themselves living in a giant peach with Roald Dahl? Or feel the intense desire, thanks to Beverly Cleary, to pull the boing boing curls of a girl named Susan? But I think my favorite book as a kid was GENTLE BEN by Walt Morey. It’s about a boy from Alaska who adopts a grizzly bear. I must have read it twenty times. I wanted to have a pet bear so badly I would actually fantasize about my family taking a trip to Alaska and stumbling upon an orphaned bear cub. (Then I grew up, hit puberty, and started fantasizing about other things… I also read that Alaska has way more guys than women and realized that really wasn’t going to be the place for me if I ever wanted to get a date).

Debra: I remember that book! Haven't thought if it in years though. You're the first to mention GENTLE BEN which now that I think of it, is amazing. Because it's a very good book.

Brad: Well, I think it would be a book about a boy wizard who goes off to a boarding school for other young wizards and then… what? That’s been done already? Aw, shucks.

Brad: No, seriously, I’m actually thankful for reader expectations. It gives me some kind of guide. Otherwise, I’m like a horse without blinders – all skittish and distracted, looking around at everything instead of focusing on the task ahead of me. Besides, the chief expectation for a mystery writer is that the crime gets solved at the end. And, really, that’s not too onerous. I feel like I still get plenty of imaginary rope with which to hang myself.

Debra: Yes there's still plenty of room (or rope) for the imagination to play within a mystery world.

Is there anything else you would like to add about the role of imagination, and dreams in creating fiction? Any other message for our readers?

I recently spoke to a group of middle schoolers who were taking a year-long writing class. I wanted to demystify the writing process for them a little bit, so I talked about how I approach a new book: Basically, I start with characters who have a problem they need to solve. So we worked together to invent some characters and then began brainstorming a plot. It was amazing the way their minds’ worked. Sure, some of what they came up with was pretty derivative – obviously drawn from whatever television shows they liked. But some of it was really original and just, well, out there, in ways both good and bad. It was so far out there that the teacher, who was doing her best to keep them on task, began reigning them in a little bit. And I don’t blame the teacher, who had to maintain some semblance of order in the classroom. But it did strike me that the young brain was this incredibly fertile thing, capable of sprouting all these wonderful, wild ideas; it was only the grown-ups who needed things to fit into a neat box. So it’s made me mindful of sometimes going back to my own middle school self – minus the braces and awkwardness – and channeling some of that great craziness.

Debra: Oh, now that is a beautiful story and message to share. Thank you for adding that one. And thank you for joining me here on this Make-believe Monday to share a little bit of the magic of writing with our readers.

Last weekend I went to an SCA medieval reinactment event called Crown List which is where they fight for who will be King and Queen. It was great fun and I enjoyed the pageantry, the fighting and the medieval feast. Just enjoyed it while absorbing it all in for the medieval romance I will soon be starting. This is my research and planning period for the story.

I'm also sending my contemporary romance out to agents this week as the great agent search is on. Otherwise this will be a quiet week and I find I'm needing one of those. Those are important too, to recharge and refill the creative cup.